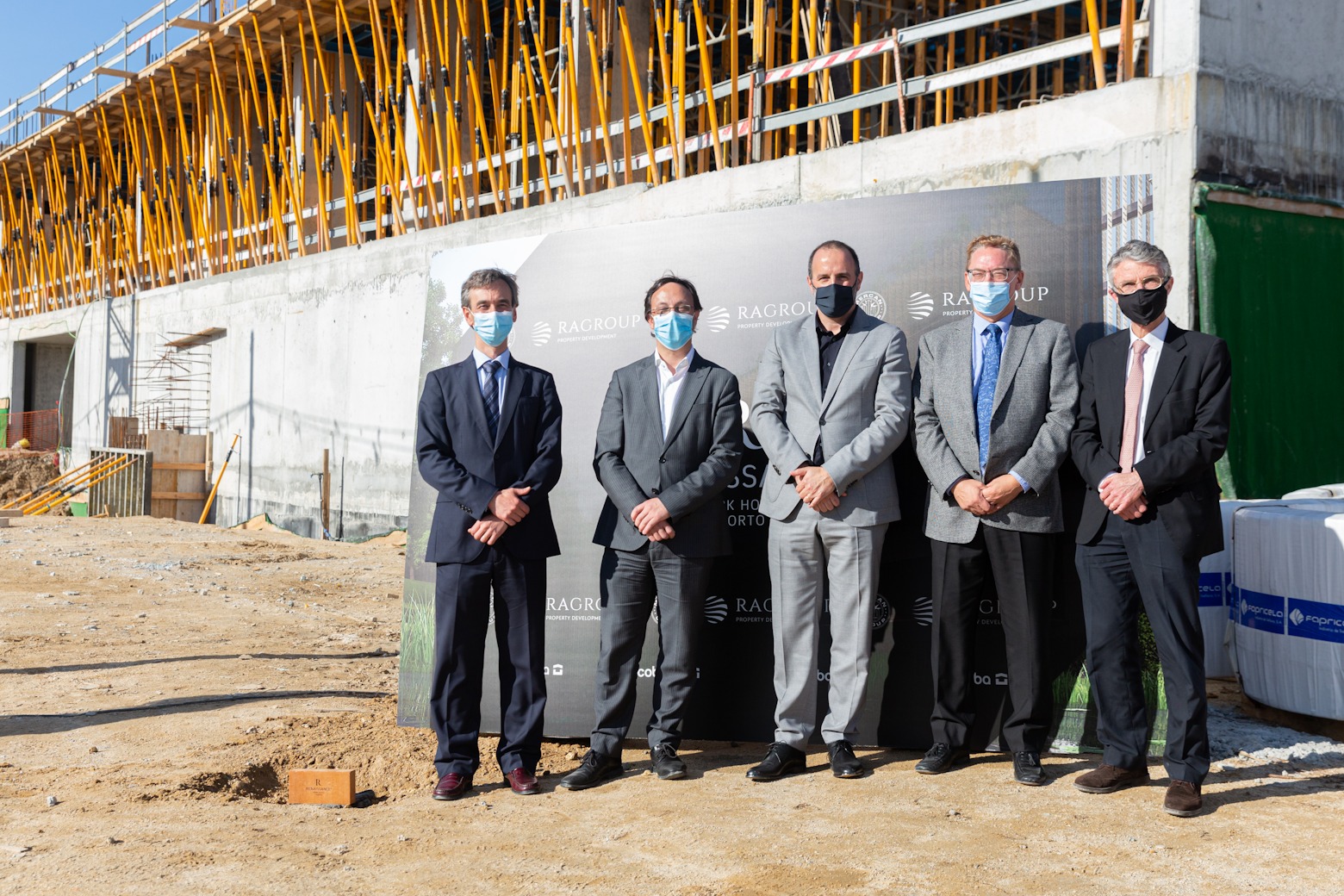 Mercan Group /RAG, one of the biggest developers of Portugal Golden Visa real estate projects, participated in two groundbreaking ceremonies in Portugal this month. On May 25th, the first stone of the Hotel Hilton Inn Evora was launched. This is the second project that Mercan Group /RAG announce this year. On May 19th, the ceremony was for the new Renaissance Park Hotel in Porto.

According to Jordi Vilanova, vice president of the Mercan Group, the Renaissance Park Hotel in Porto “is an example of the good application of foreign investment via Gold Visas, with 160 international investors”, and will “contribute to job creation and boost the tourism in the region”.

The Renaissance Park Hotel, also known as Lapa Hotel, will occupy an area of ​​approximately 14 thousand square meters, and provide 163 rooms, a panoramic outdoor pool on the top floor with a bar and terrace, a restaurant with 250 seats and a congress center with a capacity for up to 600 users.

The acquisition, by 160 international investors, of almost 23 thousand square meters of land next to the Church of Lapa included the granting of 17,700 square meters to the municipality, in a space where an urban park will be born, part of a municipal project that includes new urban fronts, especially residential areas, the reformulation of access to the Lapa metro station and the bridging of the existing road network with the creation of new streets.

The Renaissance hotel, which will be built next to the Church of Lapa, has a projected investment of 56 million euros and will create 140 direct jobs, counting during a construction phase with 110 workers permanently.

“We believe in the potential of tourism in Portugal and we are convinced that the country has all the conditions that justify the bet in this sector so affected by the pandemic. Reasons that lead us not only to maintain but to strengthen our position in Portugal, even in the face of the current economic situation and almost in countercyclical. The hotel projects that we want to develop in various parts of the country have a relevant weight in the creation of jobs, both in the phases of development and construction, as in the future hotel management, which will be long term “, explains Jordi Vilanova.

A new hotel will be born in Évora. The Hilton Garden Inn, scheduled to be completed next year, is another Mercan Group project, which involves an investment of 21 million euros. The symbolic start of the construction of the hotel unit took place last Tuesday, May 25th, with the laying of the first stone.

The Hilton Garden Inn Évora will be located next to Rossio de São Brás, “less than 10 minutes from the historic center” of the Alentejo city. “Évora has enormous potential as a tourist destination, for both Portuguese and foreigners”, stressed the vice president of the Mercan Group, Jordi Vilanova.

According to Mr. Vilanova, this new project “reflects the confidence that international investors maintain in Portugal and that goes beyond the focus on large metropolises”, since, just for the hotel in Évora, the promoters have “75 foreign investors”.

The unit, with an area of ​​more than eight thousand square meters, will have 130 rooms and an outdoor swimming pool on the roof, with a bar and terrace. A restaurant, gym and a meeting room with a capacity for up to 130 people are other aspects of the project.

Mercan foresees that the hotel will create 95 direct jobs when it is operational, and in this first phase, related to construction, it will involve 80 permanent workers. “Close to the center of Évora and the main historical points of the city, the hotel will stand out for its vibrant, modern and sophisticated atmosphere where the exterior space is combined with the ingenious details of architecture and with a warm decoration inside, to create a unique experience for those who visit, “said Mercan.

Read more: Looking for European Citizenship by Investment? Portugal is your best bet!

Read more: Lisbon and Porto among the Best Cities in the World to Visit in 2020

Mercan Group is present in Portugal, Canada, China, India, United Arab Emirates, Vietnam, and many other countries around the globe. With over 30 years of existence, the group excels in real estate investment operations in the areas of tourism.

The Mercan Group‘s projects for Portugal, developed in association with RAG (Reference Arrojada Group), rely on the performance of a team of professionals. Mercan Group /RAG have developed over ten real estate projects across Portugal that qualify for the Golden Visa program.

If you are interested in knowing more about the Portugal Golden Visa program and the current projects Mercan Group has available, visit their website and contact them today to know more.